Written by torontoai on November 4, 2019. Posted in NVIDIA.

The AI revolution is here — as near as the closest mailbox — and the time’s right to put AI to work solving your organization’s biggest challenges, NVIDIA’s Ian Buck said Tuesday.

Kicking off the Washington edition of our GPU Technology Conference, Buck, NVIDIA’s vice president for accelerated computing, detailed a new generation of technologies that will help companies put modern AI to work. 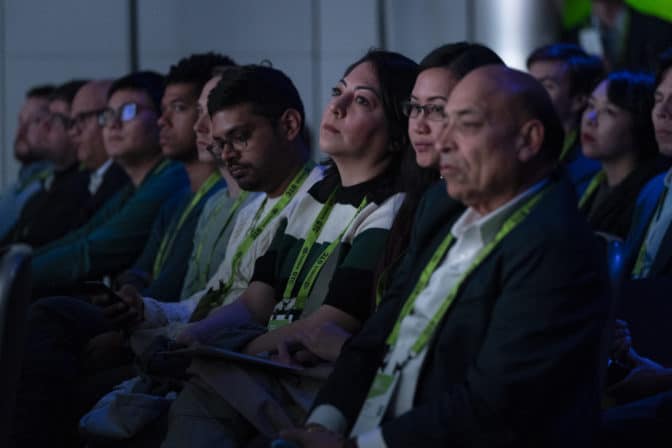 “The challenge is how do we take AI from innovation to actually applying AI,” Buck told an audience of more than 3,500 developers, CIOs and federal employees at the three-day GTC DC. “Our challenge, NVIDIA’s challenge, and my challenge is ‘How can I bring AI to industries and activate it?’”

Over the course of his hour-long talk, Buck explained how modern AI is trained and deployed, and described how NVIDIA is adapting AI for the automotive, healthcare, robotics and 5G industries, among others. 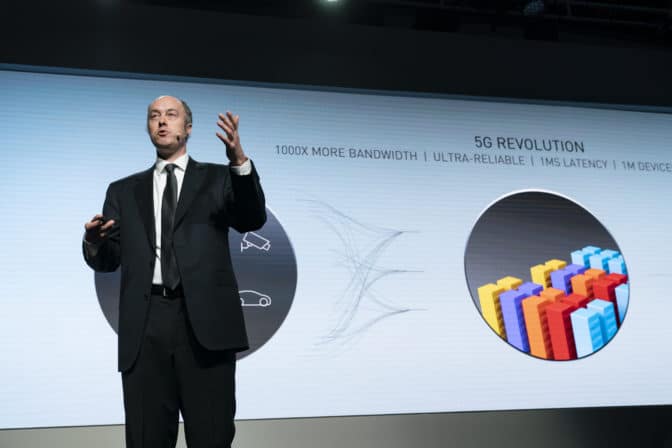 The U.S. Postal Service offers a glimpse at what’s possible.

Buck said the USPS will roll out a deep learning solution based on NVIDIA EGX to 200 processing facilities that should be operational in 2020.

“We’re very excited to see a U.S. agency really leaning into AI. They have a cool problem, processing your mail as quickly as possible, and by working with NVIDIA they’re accelerating that work,” Buck said.

A Day in the Life of AI

Buck, known for creating the CUDA computing platform while still a Stanford student, detailed how NVIDIA’s technologies accelerate every step in the process of putting AI to work from data ingestion, to AI training, and, ultimately, deployment. The next step will be the creation of vertical AI platforms that experts in a wide variety of industries will be able to put to work fast, Buck said.

In healthcare, workers are being inundated with data. A typical radiology department views 8,000 images a day. Three papers per minute are published on the PubMed medical research hub, Buck said. 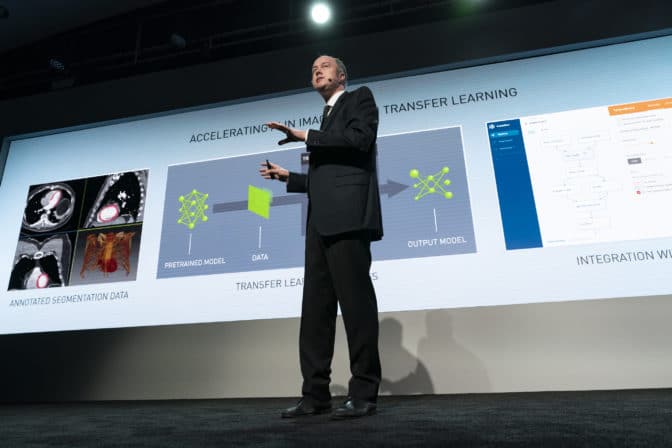 Buck detailed how the NVIDIA Clara software development kit uses a new generation of transfer learning models to help healthcare workers quickly adapt. It augments a pretrained model to tackle new tasks, such as looking for a particular kind of cancer, in minutes or hours, while using less training data.

Telecommunications is another industry that can benefit from AI as it races to adopt 5G wireless technology. Compared to today’s 4G networks, 5G allows you to download an entire season of “Stranger Things” in just three minutes on a mobile device, compared to three hours. 5G is more responsive, with 1 millisecond of latency, versus 10 milliseconds for 4G. It’s ultra-reliable.

“It is a revolution, and I don’t use that word lightly,” Buck said. “It gives us the opportunity to send enormous streams of data and respond in real time,” Buck said.

To help telcos and their customers make the most of 5Gs, NVIDIA last month launched the NVIDIA EGX Edge Supercomputing platform. Scalable and secure, these servers pack as many as four NVIDIA CUDA Tensor Core GPUs.

Smart cities can benefit from EGX, too. 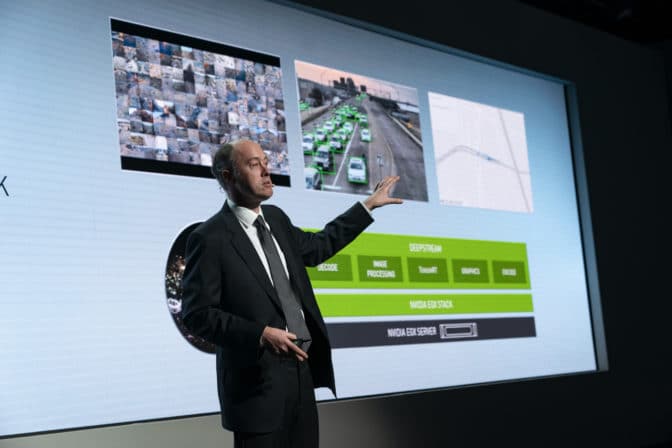 Running NVIDIA’s Metropolis Internet of Things application framework as part of a pilot program, public safety officials in Dubuque, Iowa, picked out a vehicle driving the wrong way onto a freeway.

Of course, NVIDIA is working to help make cars smarter — safer — too. NVIDIA’s DRIVE autonomous vehicle platform spans everything from cars to trucks to robotaxis to industrial vehicles.

To enable safe development and deployment, NVIDIA built an end-to-end workflow to develop autonomous vehicles, including systems for collecting data, curating it, labeling it, training AI, replaying it and using it to simulate the performance of new systems in all kinds of scenarios.

“This is a much more deeper, richer stack than just traditional inference and training,” Buck said. 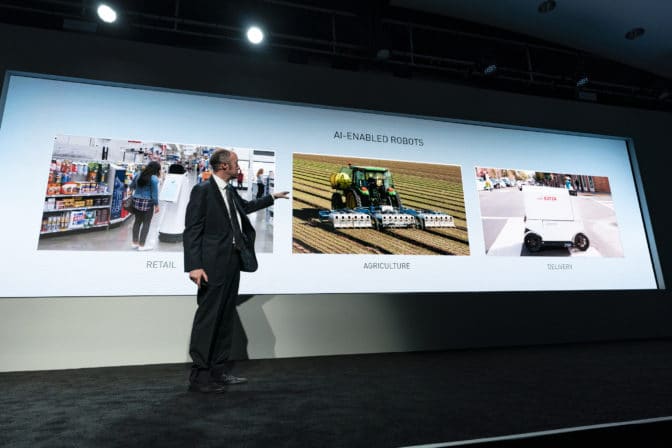 Lastly, robots are another area where NVIDIA is building tools that are unleashing a new wave of innovation. In the past, robots were very good at repetitive tasks. The future of robots, however, “is all about interaction,” Buck said.

These new generation of robots are being put to work in retail, agriculture and the food delivery business — slated to grow to $100 billion by 2025.

To enable all this, NVIDIA built Jetson, an end-to-end robotics platform that lets companies deploy new kinds of robots more quickly. It includes a complete software stack built onto a range of powerful SoCs, starting with the $99 Jetson Nano.

“This is going to be an exciting time for robotics,” Buck said.

It’s yet another example of how NVIDIA is bringing AI to vertical industries, with NVIDIA Clara for healthcare, NVIDIA Metropolis for smart cities and retail, NVIDIA DRIVE for autonomous vehicles, NVIDIA Omniverse for design and media, and NVIDIA Aerial for telcos.

“What’s going to take it to the next level is vertical platforms that allow the healthcare data scientist or smart city engineer to get access to this technology” Buck said.

“My goal and my mission is to help put AI to work not just to do amazing demos, but to help industries move to adopt AI,” Buck said.