Written by torontoai on December 19, 2018. Posted in Amazon.

The success of an ecommerce platform heavily relies on the reputation that has been established through thousands of user reviews and social shares by customers. By reviewing and sharing information existing customers establish a trust relationship with something they can’t physically touch. For this content to be accessible to a global audience it’s critical to translate it into the local language to help customers make their buying decisions.

Imagine that a company that sells older cars, boats, and motorcycles has the following problem: they are expanding their ecommerce business to several countries and they want to allow their customers to effortlessly read all reviews of their offerings written by other shoppers. 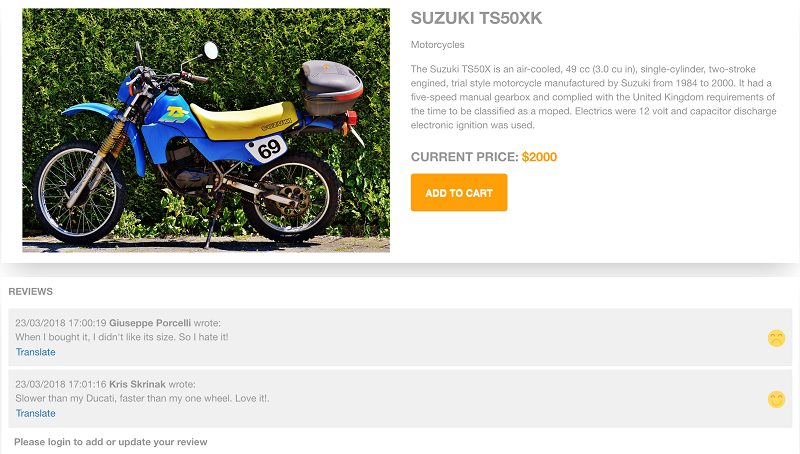 To solve this problem, we’ll show you how the company can leverage Amazon Translate to get on-demand translated reviews in real time. We’ll also show you how easily they ca integrate the service in a modern ecommerce architecture. 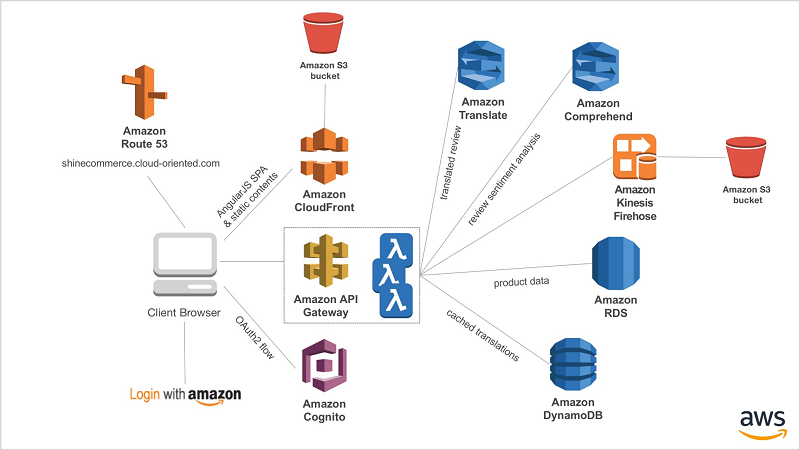 Our example website is a JavaScript single-page application that is hosted in a public Amazon S3 bucket where static website hosting has been enabled.

The example company wants to extend their global presence, so they have decided to use Amazon CloudFront to speed-up the distribution of their static web content worldwide. With CloudFront, files are delivered to end  users using a global network of edge locations that reduce latency and increase data transfer rates.

The website integrates with Login with Amazon and Amazon Cognito User Pools for user authentication and authorization, and makes REST API calls to an API deployed through Amazon API Gateway.

When a review is posted, the Lambda function will also detect the sentiment that translate in an emoticon in the example website. To understand the sentiment of the review is also a single line of code:

As you can see, both Amazon Comprehend detect_dominant_language() and detect_sentiment() API calls will just need the text as parameter.

Now that you’ve seen an example of how you can use Amazon Translate and Amazon Comprehend to empower your website, we hope you are inspired to create your own solutions.

Amazon Translate can get translations of a full sentence within a few milliseconds, enabling usage in both synchronous on-demand translations and in asynchronous tasks for executing a large number of translations with the aim of storing first and then delivering them.

Diego Natali is a solutions architect for Amazon Web Services in Italy. With several years engineering background, he helps ISV and Start up customers designing flexible and resilient architectures using AWS services. In his spare time he enjoys watching movies and riding his dirt bike.