The AWS DeepRacer League virtual circuit is underway—win a trip to re:Invent 2019!

The competition is heating up in the AWS DeepRacer League, the world’s first global autonomous racing league, open to anyone. The first round is almost halfway home, now that 9 of the 21 stops on the summit circuit schedule are complete. Developers continue to build new machine learning skills and post winning times to the leaderboards. Here’s a quick round-up of the news from all of this week’s action.

The first of six monthly tracks is the London Loop, and racing is well underway. As of May 8, 2019, the are 346 participants on the leaderboard, competing to be crowned the first champion of the virtual circuit and advance on an all-expenses-paid trip to re:Invent. Our current leader is Holly, with a time of 12.48 seconds. Twenty-three days remain, so there’s still time to get rolling into the online competition. There are prizes for the Top 10, and plenty of chances to win!

On the Summit Circuit this week, the AWS DeepRacer League made stops in Madrid and London and crowned two new champions. They both advance on an all-expenses-paid trip to re:Invent 2019 in Las Vegas, Nevada.

First up was Madrid, the third city in Europe to host the AWS DeepRacer League. The crowd was energetic and the competitors eager to win. The top 3 took to the tracks 14 times between them.

Pedro, Javier, and David arrived at the AWS Summit together, with 27 models that they had been training together in the AWS DeepRacer 3D racing simulator. They had seen some good results in the virtual world. However, the first couple of runs on the track didn’t seem to deliver in the same way, with our champion Pedro posting an opening time of 40 seconds. They pulled together as a team, tuning and trying the different models they had built at home, and eventually began to see much better results.

In the following video, David shares their thoughts on strategy during the day.

David Cañones, 3rd winner of the #AWSDeepRacer trophies, shares his strategy for the race at #AWSSummit Madrid. pic.twitter.com/XvyT5Ibtk7

With about two hours of racing left, and on his fourth attempt, Pedro was the lucky team member who took the top spot with a winning time of 9.36 seconds. His colleagues were not far behind, claiming the second and third spot. Pedro advances to the finals and is excited to work with his teammates on a strategy to take home the AWS DeepRacer League Championship Cup. Don’t worry, they both join him to take on the rest of the field! 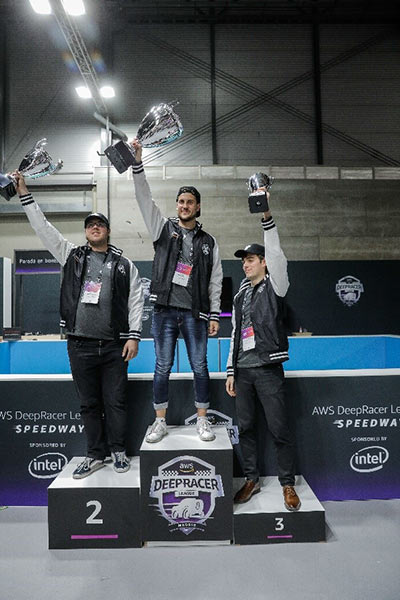 And on to London, the hometown of the reigning AWS DeepRacer Champion, Rick Fish. Developers came to the expo hall at the AWS Summit, for a full day of racing on two tracks and the chance to win their trip to re:Invent 2019.

The day started strong with our eventual third-place finisher “breadcentric,” with a 13-second lap. New to machine learning, he brought his model to the AWS Summit and was ready to race as soon as the tracks opened at 8AM. The competition came in strong as competitors quickly started logging lap times under 10 seconds, including our eventual champion, Matt Camp. Matt works at Jigsaw XYZ, whose cofounder happens to be Rick Fish! Rick’s team at Jigsaw XYZ had been preparing for the London race since re:Invent and knew that the pressure would be on to win.

Matt had been working on his model at home and was eager to see how well it could perform. Matt’s friend and colleague Tony joined him. With only 1 hour to go, they were in second and third position on the podium, behind Raul, who had spent most of the day on top with a 9.01-second lap. The Jigsaw XYZ team took to the tracks one more time. In his final 2 minutes of racing, Matt clinched the title with an 8.9-second lap. Matt had no experience with machine learning before re:Invent 2018. He now heads back in 2019 to take on Rick Fish and rest of the field to win the AWS DeepRacer League Championship Cup. 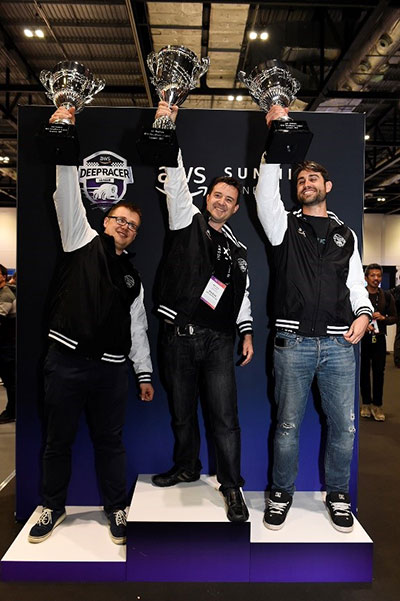 The competition and excitement are certainly building in the AWS DeepRacer League. Developers of all skill levels get hands-on, learn, and put their machine learning skills to the ultimate test. Get started in the AWS DeepRacer League, either virtually or at the next summit near you. We have all the tools to get you started even if you have no machine learning experience, as well as resources to help you take on the challenge and win!

Coming soon, we share our best tips from the AWS DeepRacer team, so stay tuned.