The AWS DeepRacer League is the first of its kind global autonomous racing league, providing developers of all skill levels with the opportunity to get hands-on with machine learning and have fun doing it.

Following the sun to crown the champions

The races began in Seoul, South Korea, where developers were eager to get on the tracks in an attempt to beat the current world record set by the Singapore champion, Juv Chan.

Seoul was the second two day event on the summit circuit calendar. At the end of the qualifying rounds on the first day, the bar was set high. Racers then returned on the second day to try and capture the top spot. After the first day, “Steve’s” autonomous vehicle time was just under 10 seconds. He was about eight-tenths of a second from the current world record.

As the first day of racing in Seoul was nearly done, developers began competing in Dubai, UAE. Crowds gathered to watch developers put their skills to the test on the tracks. It was a close race in the top spots, but “Mats @ virgin mobile” emerged victorious with a winning time of 18.078 seconds. He trained his model at home using the Sagemaker RL notebook. 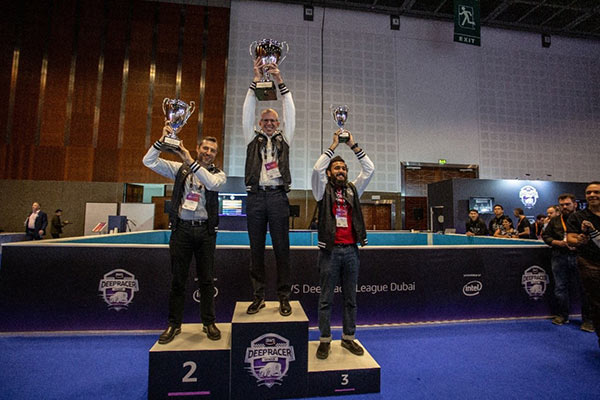 The Top 3 on the podium at Dubai

While the story unfolded in Dubai, the races in Amsterdam, Netherlands got underway. Another high-energy event, more developers gathered in Amsterdam to build, train, and deploy reinforcement learning models to their AWS DeepRacer fleet cars. The winner in Amsterdam, Pon Datalab, came to the summit with his colleagues to learn more about how AWS can improve data science for their business. He registered for a DeepRacer workshop with a few teammates because this was the first time any of them tried to build a machine learning model. When asked what the best part of his day was, Pon Datalab said “Going to the workshop, then working as a team to train our model, then seeing it in action, seeing it in first place was amazing, I cannot believe it!” 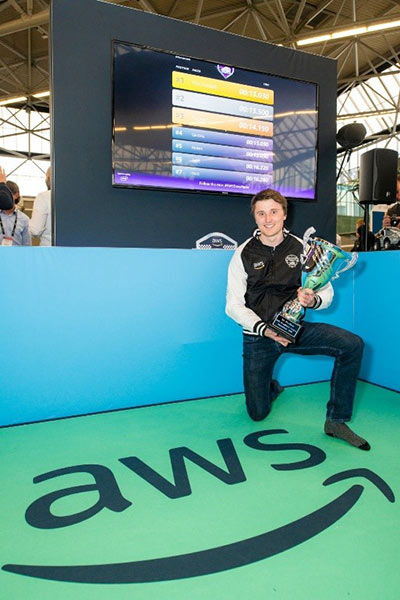 Rounding out the triple with more record lap times

As we crowned the second of three champions, our competitors in Seoul were preparing for a final day of racing. The first day ended with the promise of an exciting day 2, as racers went home setting close to a record lap times and armed with new knowledge of how to improve their models from DeepRacer workshops, and experts at the track. The promise was kept, as 8 of our top 10 broke the 10 second barrier and our top 3 all smashed the previous record of 9.090 with sub 9 second laps!

Although all of our participants had some fantastic performances, there can be only one champion. He was Yejun Kim, who had started building his model 3 days prior to the summit using the SageMaker RL notebook. He attended a workshop and tweaked is racing model based on what he learnt there and improved his lap time each time he raced! His record time was 7.998 seconds!! He is now the AWS DeepRacer world record holder, and is excited to see what he can do when he gets to the finals at re:invent. Watch his winning lap time and listen to his excitement below.

#AWSDeepRacer world record has been set at 7.998 secs #Seoul, kudos to the winner and #AWSKorea team who provided all the support to developers. Watch out for the 3rd lap, that’s under 8secs. pic.twitter.com/B16nOXNfxl

Developers of all skill levels can race for prizes and glory, from anywhere in the world

The global developer community is achieving some amazing lap times. Can you? Whether you are new to machine learning or building on existing skills, you can race with enthusiasm and have fun doing it. Each summit champion is awarded an expenses-paid trip to the finals at re:Invent 2019 in Las Vegas, Nevada. There, the global champions compete for a chance to win the AWS DeepRacer Cup. It doesn’t matter whether you set a world record time or win by learning brand new skills.

Coming soon is the virtual league, where you can compete online through the AWS DeepRacer console. The virtual league gives you the same opportunity to compete and advance to the finals in Las Vegas, whatever continent or country you are in! With tracks varying in difficulty, and exciting themes that will be unveiled each month, the AWS DeepRacer League provides developers the opportunity to succeed.