The smartphone revolution that’s swept the globe over the past decade is just the start, NVIDIA CEO Jensen Huang declared Monday.

Next up: the “smart everything revolution,” Huang told a crowd of hundreds from telcos, device manufacturers, developers, and press at his keynote ahead of the Mobile World Congress gathering in Los Angeles this week.

“The smartphone revolution is the first of what people will realize someday is the IoT revolution, where everything is intelligent, where everything is smart,” Huang said. He squarely positioned NVIDIA to power AI at the edge of enterprise networks and in the virtual radio access networks – or vRANs – powering next-generation 5G wireless services.

“The smartphone moment for edge computing is here and a new type of computer has to be created to provision these applications,” said Huang speaking at the LA Convention Center. He noted that if the global economy can be made just a little more efficient with such pervasive technology, the opportunity can be measured in “trillions of dollars per year.”

Joining Jensen on stage was Ericsson’s Fredrik Jejdling, executive vice president and head of business area networks. The company is a leader in the radio access network industry, one of the key building blocks for high-speed wireless networks.

“As an industry we’ve, in all honesty, been struggling to find alternatives that are better and higher performance than our current bespoke environment,” Jejdling said. “Our collaboration is figuring out an efficient way of providing that, combining your GPUs with our heritage.”

Together NVIDIA and Ericsson are innovating to fuse 5G, supercomputing and AI for a revolutionary communications platform that will someday support trillions of always-on devices.

Huang also announced a new collaboration with Red Hat to building carrier-grade cloud native telecom infrastructure with EGX for AI, 5G RAN and other workloads.  The enterprise software provider already serves 120 telcos around the world, powering every member of the Fortune 500.

Together, NVIDIA and Red Hat will bring carrier-grade Kubernetes — which automates the deployment, scaling, and management of applications – to telcos so they can orchestrate and manage 5G RANs in a truly-software defined mobile edge.

“Red Hat is joining us to integrate everything we’re working on and make it a carrier grade stack,” Huang said. “The rest of the industry has joined us as well, every single data center computer maker, the world’s leading enterprise software makers, have all joined us to take this platform to market.”

Technology for the Enterprise Edge

EGX combines NVIDIA CUDA-X software, a collection of NVIDIA libraries that provide a flexible and high-performance programing language to developers,  with NVIDIA-certified GPU servers and devices.

To offer customers an end-to-end solution from edge to cloud, Microsoft and NVIDIA are working together in a new collaboration to more closely integrate Microsoft Azure with EGX. In addition, NVIDIA T4 GPUs are featured in a new form factor of Microsoft’s Azure Data Box edge appliance.

Walmart Adopts EGX to Create Store of the Future

Huang cited Walmart as an example of EGX’s power.

Using EGX’s advanced AI and edge capabilities, Walmart can compute in real time more than 1.6 terabytes of data generated per second. This helps it use to automatically alert associates to restock shelves, open up new checkout lanes, retrieve shopping carts and ensure product freshness in meat and produce departments.

Just squeezing out a half a percent of efficiencies in the $30 trillion retail opportunity represents an enormous opportunity, Huang noted. “The opportunity for using automation to improve efficiency in retail is extraordinary,” Huang said.

That power is already being harnessed for a dizzying array of real-world applications across the world:

To demonstrate the possibilities, Huang punctuated his keynote with demos showing what AI can unleash in the world around us.

In a flourish that stunned the crowd, Huang made a red McLaren Senna prototype — which carries a price of a hair under $1 million — materialize on stage in augmented reality. It could be viewed from any angle — including from the inside — on a smartphone streaming data over Verizon’s 5G network from a Verizon data center in Los Angeles

The technology behind the demo: Autodesk VRED running in a virtual machine on a Quadro RTX 8000 server. On the phone: a 5G client build with NVIDIA’s CloudXR client application software development kit for mobile devices and head mounted displays.

And, in a video, Huang showed how the Jarvis multi-modal AI was able to to follow queries from two different speakers conversing on different topics, the weather and restaurants, as they drove down the road – reacting to what the computer sees as well as what is said.

In another video, Jarvis guided a shopper through a purchase in a real-world store.

“In the future these kind of multi-modal AIs will make the conversation and the engagement you have with the AI much much better,” Huang said.

Huang showed what’s now possible with a real-time demo of a gamer playing Assetto Corsa Competizione on GeForce Now — as a cameraman watched over his shoulder — on a smartphone over a 5G network. The gamer navigated through the demanding racing game’s action with no noticeable lag.

The mobile version of GeForce NOW for Android devices is available in Korea and will be available widely later this year, with a preview on display at Mobile World Congress Los Angeles.

The opportunities for AI, IoT, cloud gaming, augmented reality and 5G network acceleration are huge — with a trillion new IoT devices to be produced between now and 2035, according to industry estimates.

And GPUs are up to the challenge, with GPU computing power growing 300,000x from 2013, driving down the cost per teraflop of computing power, even as gains in CPU performance level off, Huang said. 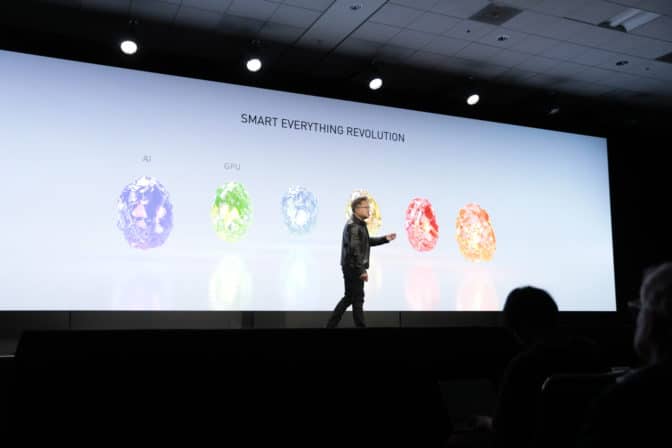 Huang compared all these elements to the powerful “infinity stones” featured in Marvel’s movies and comic books.

“What you’re looking at are the six miracles that will make it possible to put 5G at the edge, to virtualize the 5G data center and create a world of smart everything,” Huang said, and that, in turn, will add intelligence to everything in the world around us.

“This will be a pillar, a foundation for the smart everything revolution,” Huang said.