There’s no mistaking why the leopard cat of Taiwan got its name. While only about the size of domestic felines, it sports a beautiful, flower-spotted pattern on its fur.

There’s also no debate about why the leopard cat, the only remaining native wild cat species in Taiwan, is on the edge of extinction.

Fewer than 500 of the leopard cats live in a natural habitat that overlaps with many development projects in the central regions of the island. In an otherwise rural area, the cats are often victims of roadkill due to increased traffic.

To preserve leopard cat populations, the Taiwanese government, animal protection organizations, researchers and AI experts have been working together to save the species.

DT42, a Taiwan-based deep learning startup, and a research team led by Ya-Yu Chiang, assistant professor of mechanical engineering at National Chung Hsing University (NCHU), are collaborating on an AI project initiated by Taiwan’s Directorate General of Highways to detect leopard cats when they near roads and keep them out of harm’s way, reducing roadkills.

One of the primary challenges of conserving the leopard cat in Taiwan stems from a lack of resources and network infrastructure in the field. Building the network required for cloud-based AI detection isn’t feasible in the animal’s rural habitat. 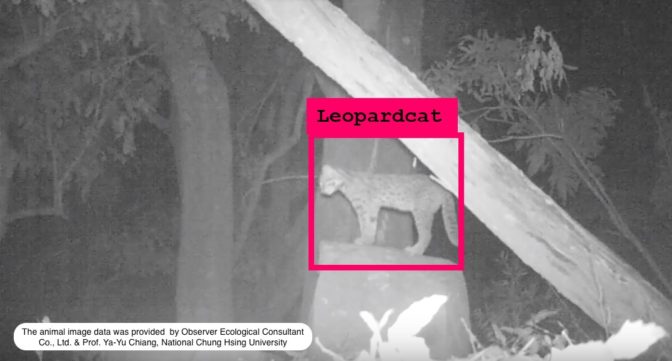 When one of the devices spots a feline getting too close to the road, it sets off a mechanical warning. The alert system plays sounds designed to keep the animals away from passing cars. Additionally, flashing lights on the road also attract the attention of the animals to prevent them from getting on the road.

“After considering all the factors — size, heat dissipation, price, device stability and flexibility — the Jetson TX2 was the best hardware choice on which to deploy our AI model,” said Tammy Yang, DT42’s founder and CEO. “For training, the GPU resources in the AWS cloud platform are easy to use, allowing anyone to upload leopard cat images to help train and refine the neural networks and improve recognition accuracy.”

The company optimized its algorithms for inference at the edge using the NVIDIA Jetson TX2, shrinking the time to detect fast-moving leopard cats to less than half a second. A short response time is critical to spot the animals and sound the alarm before one runs into the road.

The average leopard cat roadkill rate from 2015 to 2018 was about one feline killed a month. In the three months since the AI system was deployed in a test area in central Taiwan, there’s been just one leopard cat-related collision — and the animal survived. Earlier this month, the system marked its first recorded instance of deterring a crossing.

Based on these initial results, NCHU researchers and the Taiwanese government hope to roll out additional AI-powered developments.

“Following the success of the leopard cat project, we are going to broaden the monitoring field, and are in discussions with the government to initiate new projects to continuously support leopard cat preservation,” said Chiang.

The researchers also plan to expand the project to other wildlife, including the endangered Chinese ferret-badger and masked palm civet.

“We are devoted to using deep learning to make contributions to the world,” Yang said. “We’re looking forward to seeing more people and organizations joining meaningful conservation projects like this.”

The leopard cat protection project was recently featured in a broadcast by the Taiwan Public Television Service, attracting the government’s attention and sparking discussions about the need for leopard cat conservation laws.